Sacrifices are either RITUAL    OR     REAL.

Can you tell the difference?

Use the Jesus filter!
So are there holy and unholy animal sacrifices?

Lets check what an unholy animal sacrifice looks like.

'The blood pumped from a still-beating heart is the purest form of energy': Inside the horrific Mexican satanist 'Black Mass' with live sacrifices that shocked disgusted tourists

WARNING: GRAPHIC CONTENT in the  article.  (Extracts only below)

'They weren't just sacrificing these animals, but they were torturing them first', said Randall Sullivan, visibly shaken by what he had witnessed.

'It seems as if pain and suffering are part of the experience, and there's no doubt there's a dark power in blood sacrifice.

'The next step would be human sacrifice', the American told MailOnline, 'and I frankly think these people have done it'.

'The fact that they would do that to a defenseless animal is sickening, and makes me scared about the lengths they would go to in order to see the devil'.

Michelle, who comes from Austin, Texas was at the ceremony in an attempt to improve her own psychic powers, which she claims have helped her to locate the souls of over one hundred kidnap victims.
'It makes me scared for myself to think I've witnessed this. They need to stop these rituals', she said with tears in her eyes beside a burning pentagram which the satanists had used to summon Beelzebub.
'If they can kill an animal in the name of purification, what other lengths will they go to?'

Sacrifice: The fresh blood of chicken and goats was gathered in a bronze bowl was poured over participants.

'They are the only people I've head of who can mix black and white magic, that's like mixing God and the Devil'.

To read about holy sacrifices, please see the diagram below or for a more detailed study, there is a 6 page article also below.

Read the article on-line below or download the pdf file by clicking on the button at the bottom of this page. 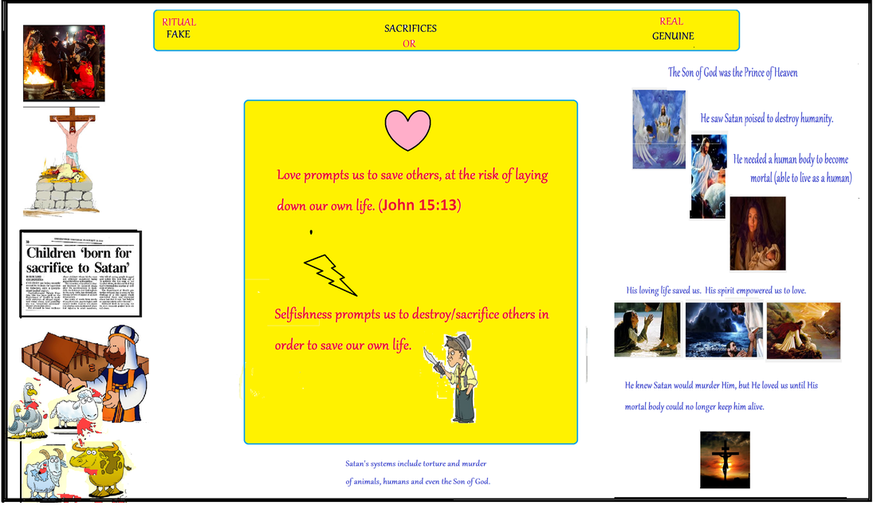